Day 7:
We woke up on day seven in Kashgar, only to hear that Flora wasn't feeling too well overnight. She had a mild case of food poisoning and going on the road in that condition didn't seem wise. Luckily, our plan for the next two days was to head up to the border where China meets Pakistan, stay one night there and come back to Kashgar the night after. This means that Flora could stay in Kashgar to recover and we'll rejoin her the next night. Flora was very much tempted to come with us, but in the end decided to stay behind. We made sure we stocked her up on water and crackers before we left.

One thing to note is that the border we were traveling to was up in the mountains. The further along we got, the greater the elevation, and pretty soon, we were surrounded by snow capped mountains!

On the way, we had to stop to let a herd of lamb cross the road! 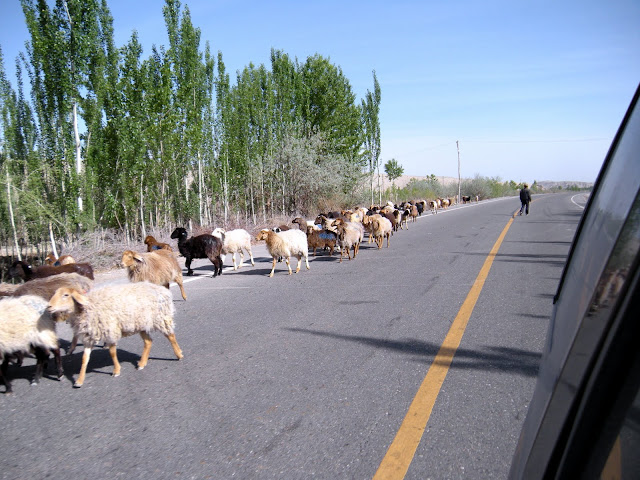 We decided to make a quick pit stop to take pictures of the red mountains all around us. 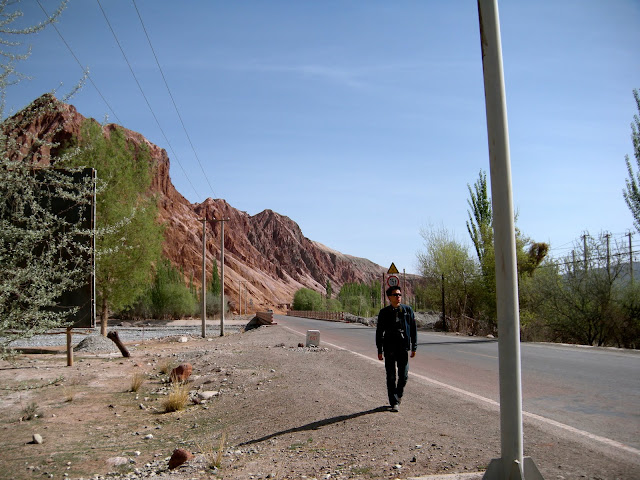 On the other side of the road, the snowy mountains are peeking at us! 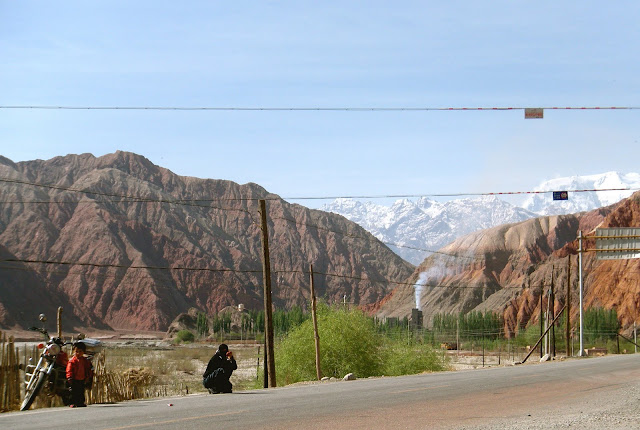 At the next pit stop, we found a random semi-permanent snack stand.  The snowy mountains are getting closer! 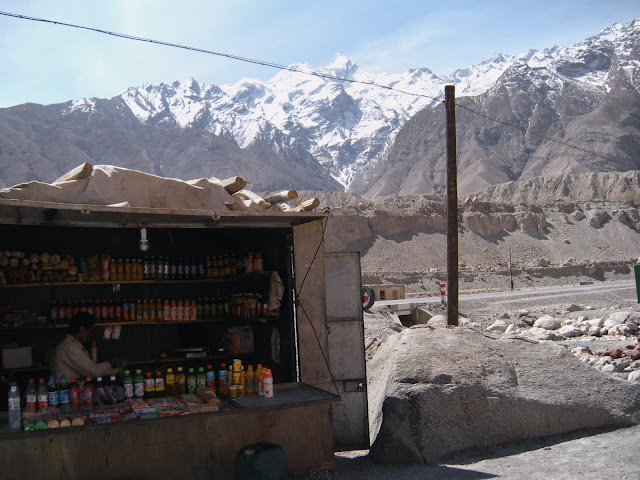 We spotted a few pastures at the foot of the mountains.  They actually do resemble the ones we see in games! 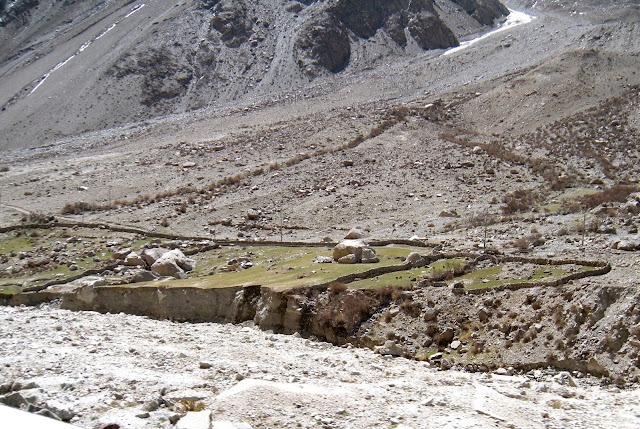 Kel and Annie on the way up the mountains. 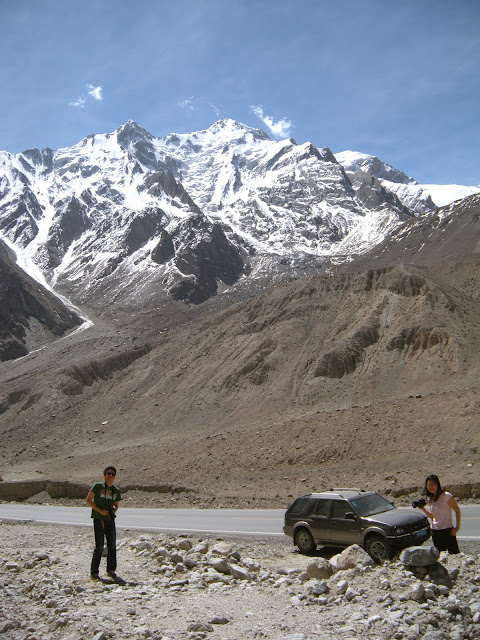 Next up, Karakul Lake (卡拉庫爾湖)!  It was no doubt the most beautiful place we've ever been to!  We couldn't believe a place such as this existed.  The setting was absolutely surreal!  The weather was perfect, too.  We had the bluest of skies with a couple fluffy clouds to complement, the mystical mountains in the backdrop, and even grazing cows to be our models!  This was the definition of breathtaking!  We felt like we were in a National Geographic photo!  We were extremely grateful for the weather, because on the way back it was foggy and rainy and the place suddenly seemed bleh.  It was quite unbelievable how different it looked 24 hours apart.

Below: We couldn't help but snap a couple more pictures with this surreal backdrop.  The cows were excellent models. 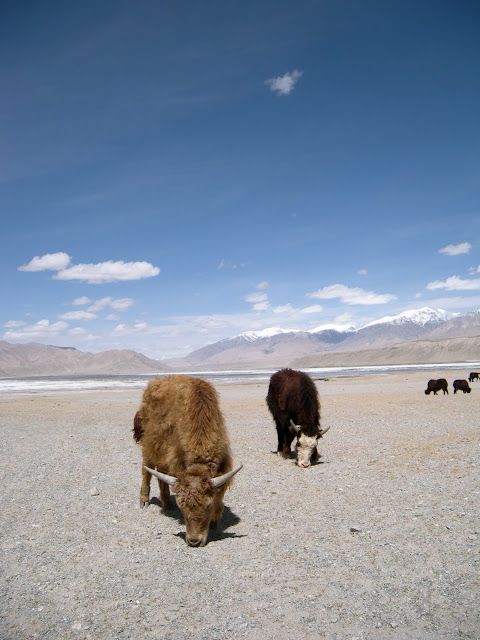 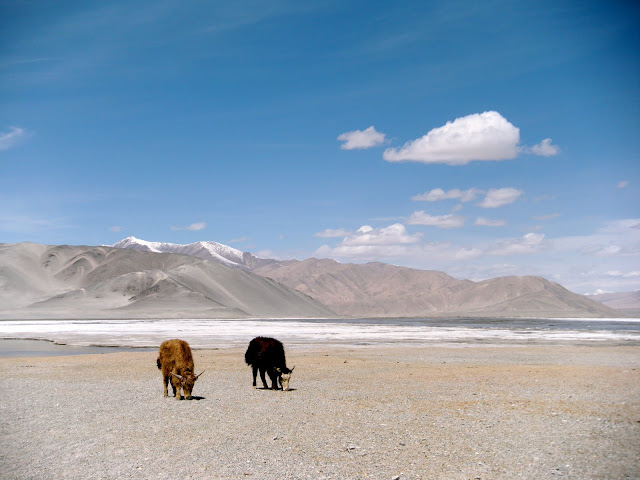 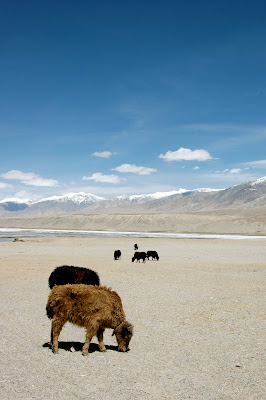 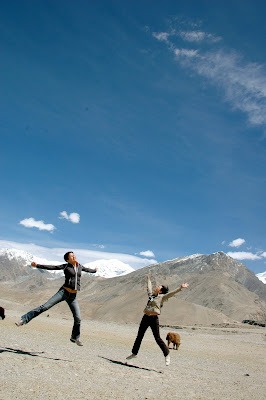 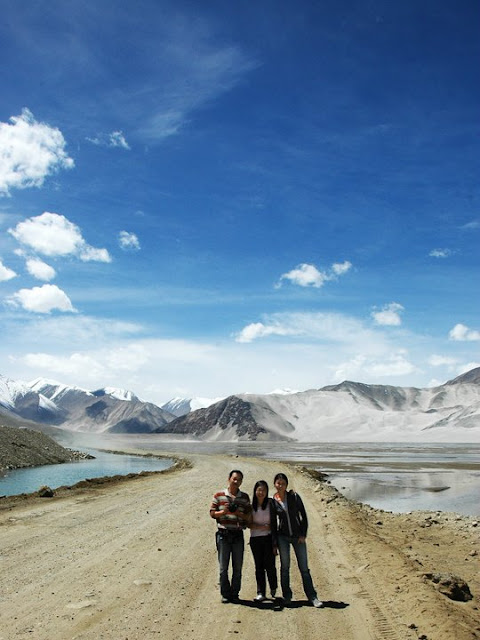 Further down the road, we couldn't help but stop and take more pictures of the lake.  Siu Bo told us that the mountain peaks we were seeing here are the Kongur Tagh (公格爾峰) and Muztagata (慕士塔格山).  The Kongur Tagh is the highest peak of the Kunlun Mountains, sometimes considered as part of the Pamir Mountains.  The Muztagata is the second highest in this region and forms the northern edge of the Tibetan Plateau.  Note that the Mustagata is not the second highest in the Tibetan Plateau.  It is reputedly one of the easiest 7,000m peaks in the world to climb.  As we were taking pictures, a local man drove up in his motorcycle and tried to sell us trinkets.  We pretended we couldn't understand hoping he would give up.  However, more locals drove up in motorcycles with similar trinkets!  We left fairly quickly after that, guarded by Siu Bo, who conversed with them briefly before leaving. 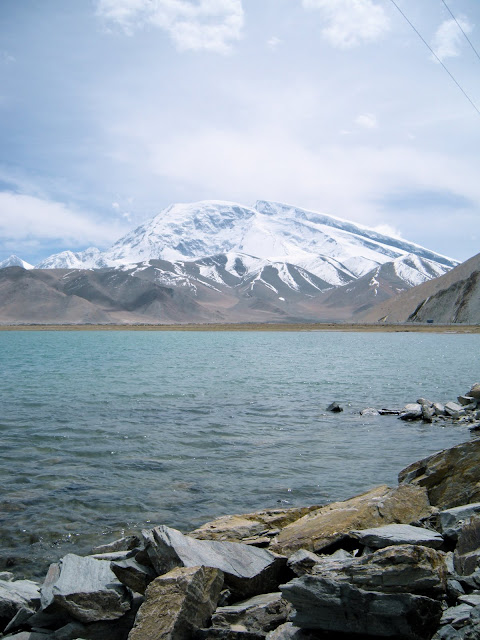 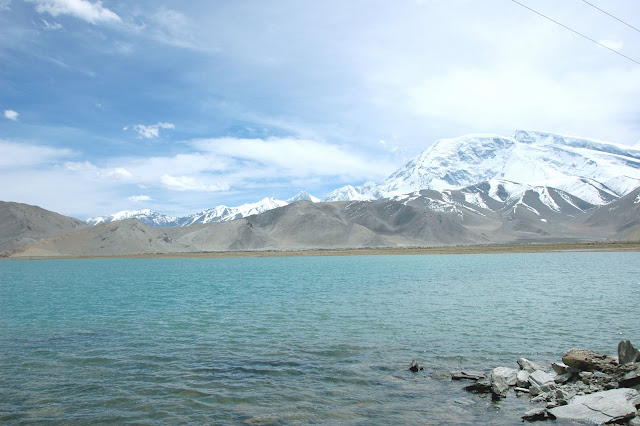 When we got into town, we inquired at the military post and found that they open at 8:30am for the first batch of tourists through the next day.  We decided to head up the next day instead of that afternoon for better use of time.  Instead, after lunch we drove to Taxkorgan (塔什庫爾幹) where we visited a ruined stone fortress (石頭城) there.  Siu Bo brought us to the side of the fortress to take some pictures because he said there's not much inside.  There was another herd of lambs there, herded by a combination of kids with sticks, and dogs.  After taking some pictures there, we decided since we came all this way, we might as well go in and check it out.

Below: The town of Taxkorgan. 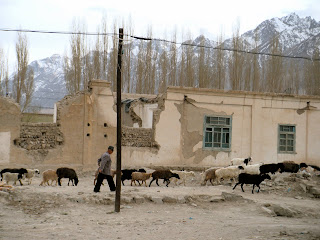 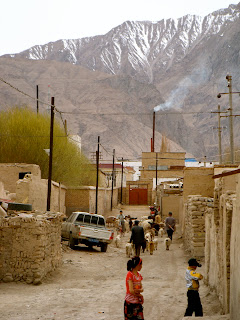 Normally, there would be an admission fee to get into the fortress.  However, the ticket office was closed that day, but we did find a path around the gate at the top of the steps.  The ruined fortress was supposedly where Marco Polo had once stayed, as did the characters from the Chinese classic "Journey to the West".  Unfortunately, there wasn't much left but piles of rubble and what looked like a few walls, so we proceeded to take pictures of the surrounding area instead.


Left: The front entrance to the ruined fortress.  We weren't sure if the steps were steeper than normal, or if it was solely the elevation and thinner air, but we were panting and I  remember having to take a break in the middle of the climb.
Right: Looking down at the town of Taxkorgan. 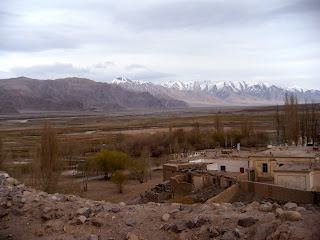 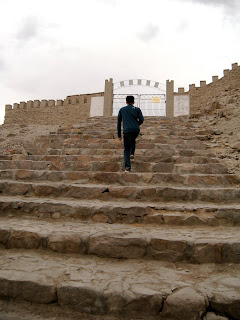 Below: We found it quite cool how the small town is nestled between snowy mountains, with pastures surrounding it.  I also wondered whether kids growing up here ever left the town. 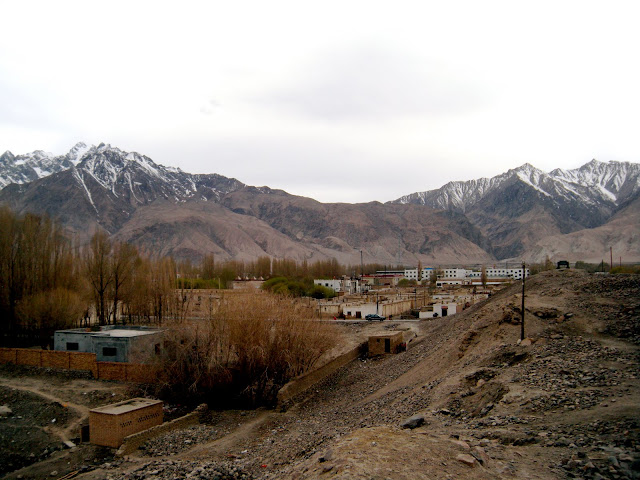 We ended the day evaluating two different hotels Siu Bo said were more decent in town.  It wasn't the cleanest of places, but there wasn't much to choose from.  This was the one place where we found the tap water to be somewhat murky and decided to brush our teeth and wash our faces with bottled water over tap. There was no point risking ourselves and getting sick.  Afterall, it was just one night we had to endure.

Day 8:
We woke up the next morning and realized there was no running water!  Good thing we still had some bottled water stocked up and used that to clean up.  Apparently, the town ran on glacier water and the pipes must have froze overnight.  They said they'll get water back by afternoon!  We grabbed breakfast at a local shop and realized this must be a common occurence and locals here probably saved up buckets of water the night before.

We proceed to Khunjerab Pass (红其拉甫口岸), a check point post where China met Pakistan, about 1km north of Tashkorgan.  We had to purchase a permit to drive up to the pass, and a few kilometers from it, we had to wait by a miliary post for an officer to accompany us up.  They would only allow a certain number of people up at a time, and each group had to have an officer with them.  There was a sign at the bottom that read “Khunjerab Pass is not a tourist spot, but an important military posts. We reserve the right to refuse permit to any travelers.”  By the time we got there and out of the car, we realized how much colder it was up there.  We zipped up our jackets and slowly hiked up the slope, taking our time, noting how much thinner the air was there.  We were quite amazed at how little the guard accompanying us was wearing and would've taken more pictures of the outpost with the guards, but we feared for our cameras as taking pictures of anything related to the military was a big no-no.

Left: The military post where we waited for a military officer to accompany us.
Right: The Khunjerab Pass. 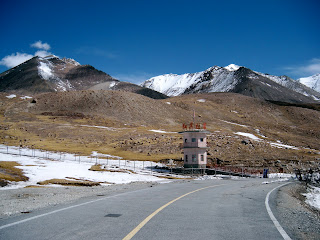 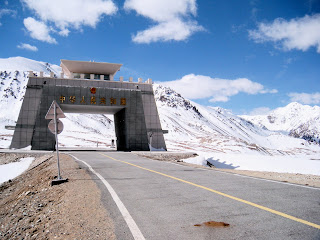 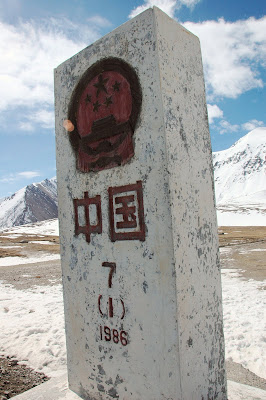 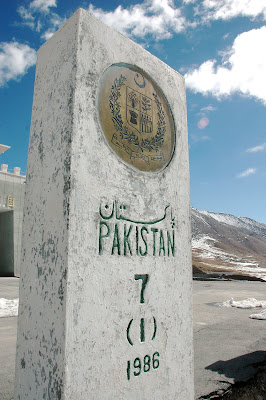 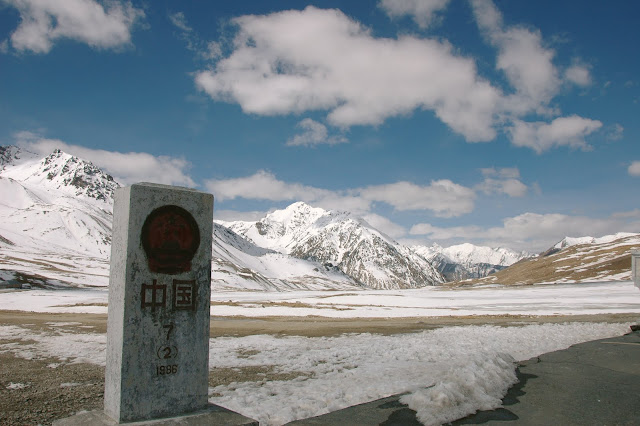 We headed back to Kashgar that night to meet up with Flora for dinner.  From Kashgar to Khunjerab Pass and back, we travelled 832km.
Posted by BubBLeS at Wednesday, July 20, 2011