What the girls did 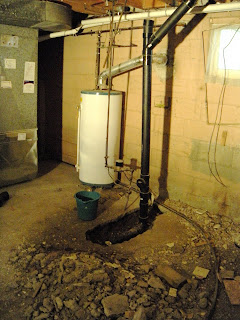 As promised, this is the hindsight picture of the hole Kel and his dad dug with the mini jackhammer in the basement cement floor to replace the main drain pipe. 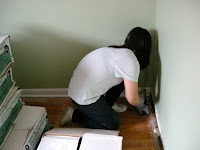 On Saturday, Erica came by to help out at the house. Kel told us he needed to get rid of all the wall moldings and proceeded to show us how to pry it out with a hammer and crowbar. So the two of us split the job, Erica would pry the wood off the wall and I'd hammer the nails flat to the board for easier and safer disposal later.

After lunch, we went to Lowe's to get the tub for the bathroom. When we got there, we asked for assistance to load the tub to our flatbed, only to realize it was actually really light.. :P It's okay though, we needed him to get us the walls to the shower, as well as the drain stuff anyways. The two of us had an interesting time trying to wheel everything to the front as the walls and the box it came in was awfully big. It was like a full out obstacle course! I was pushing random ladders and mobile shelving out of the way as Erica drove the boxes through the aisles. Some random old lady was cheering us on. Erica spotted another sales guy on the floor just when we were about to make it to the main aisle, so we went over and asked him to drive. I guess it's different when you work there, because the guy was knocking over random things and going full out and people would just duck out of the way. Anyhow after we paid, we needed help moving the things onto the van. They were telling us that there was no way this would fit in any van, unless we had a pickup truck, and that we should rent their van. The other option was to tie it to the top of the van, but we'd have to be really careful driving it back. I can see Erica was contemplating just handing over a twenty and taking their van. But the thing is, we'd have to drive it back and return it, so its a hassle either way. We ended up asking the guys to help us tie the box to the roof and we slowly drove back to the house. The rest of the afternoon, Erica helped Kel and his dad, while I vacuumed all the cracks at the bottom of the walls left by the missing moldings. Besides monster size dust bunnies, there was a crazy amount of bobby pins, random lost buttons, and I even found a sewing needle! Our day didn't end until 8:30ish. Thanks Erica!

Below: Left - the new A/C unit we had installed a couple weeks ago. Right - the garbage we generated just after this weekend. (Kel and Ken already did a garbage run on Friday night and cleared everything from before..) 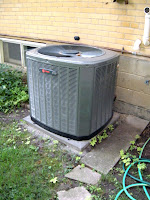 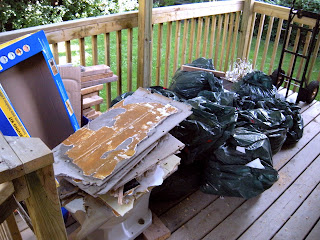