On our last day in New York City, we hit up Nougatine at Jean-Georges for lunch before making our way back home.  I had originally booked for Jean-Georges, but there was some kind of mix up with the reservation desk as they've penned me down for Nougatine.  I only realized this mistake when they called to confirm and by then it was too late to make a change.  Jean-Georges was full until 2:30pm. Bleh.  Ah wells, Nougatine it is.  Nougatine had the lunch prix fixe menu, which wasn't a bad deal.  For $32, you can get an appetizer, entree and a dessert, so that's what we went for. 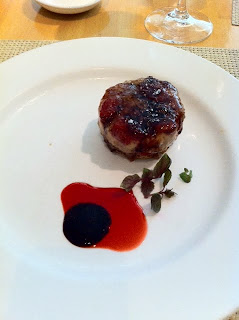 For my first course, I decided to supplement a couple bucks to get an appetizer that was off the prix fixe: Foie gras brulee, slow-roasted strawberries and aged balsamic vinegar.  I had originally wanted to try the Foie gras brulee at Jean Georges which came with the pineapple-meyer lemon jam, but this will have to suffice.  I was pleasantly surprised at how light the roasted strawberries complimented the dish.  The top was seared crispy, and when I applied pressure to cut into it, bits of the foie gras would bubble up through the crust! Joy!  In the cross section, I found the roasted strawberries nested in the foie gras which was the other surprise.  All in all, I think the berries really lightened up the entire dish, making it suitable as a lunch item. 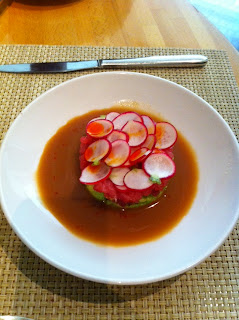 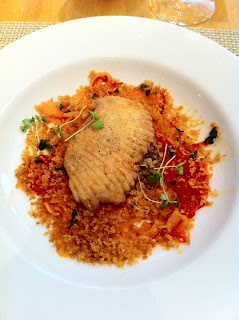 My entree: Slowly cooked skate, eggplant, pepper ragout.  I thought the skate was made really well, just tender and not overcooked.  Each piece of the wing flaked off nicely.  Wasn't a big fan of the ragout though.  I expected the fresh pepper taste, but it came out to be pickled pepper.  A little sour for my taste on an entree. 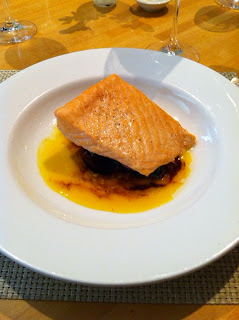 Kel's entree: Slowly cooked salmon, with sauteed potatoes, black olive and passion fruit.  As you can see, the salmon was a good sized portion, not what we expected.  And it was sitting on a bed of spinach, which was on top of the potatoes.  Kel said the overall dish was good, but he thought the spinach was slightly over done, a bit chewy.  What can I say, the man's picky about his greens! 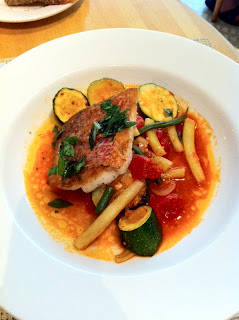 We ended our meal with the warm chocolate cake with vanilla bean ice cream, which once again, put us over the top, but hey, who can complain about too much chocolate, especially when it's oozing out the centre? :) 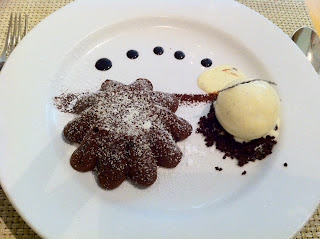