When we bought our house two years ago, what attracted us a lot was the big yard with the huge trees.  You can't get yards this size, nor trees this big in the new subdivisions.  Looking out onto our backyard gave me a sense of serenity, almost like we're out of the city.  The trees would block the view of the neighbouring house behind us and offer shade for the house in the summer, a real energy saver. 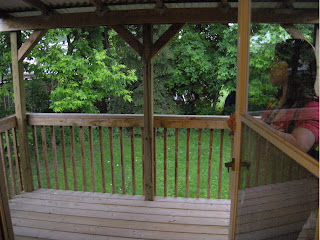 However, what this also meant was that we didn't have a back fence to the yard.  At first this didn't seem like an issue, since we couldn't see our back neighbour anyways, but that's when winter came along and we realized we would be needing that fence.  All the leaves were gone, and there was only one coniferous standing alone in the yard.  We could now see our neighbour clear as day, as well as all the junk he dumps in this backyard!  They heated their house with a wooden stove, which meant there were piles and piles of wood laying about, along with random children's toys, a picnic table, barrels... you name it, he's got it!

So this year, seeing as we weren't as tied down renovating the interior of our house, we've decided to put up a fence.  Kel's found that one of the bigger trees in the back was actually dead and hollowing out, so that was our target.  He started the project by clearing the random shrubs and baby trees in the back and then one weekend, with the help of his brother and father, went up the tree to cut it down piece by piece.

He started by going up a ladder, then went shimmying up part of the tree.  His brother had a harness so they strapped Kel in, while he belayed him from the ground, in case he should fall.  Watching him climb up was quite a feat.  Kel wasn't exactly wearing climbing shoes, so there was no grip.  They ended up having to pulley up some boards and an impact gun for him to nail some steps onto the tree.

Below: Kel climbing the tree, while Ken belayed him from the ground and some of the crap visible in our neighbour's yard. 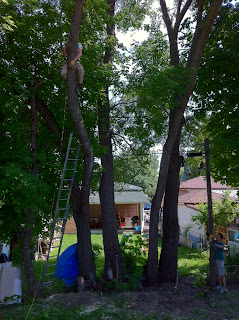 When Kel finally got to the arc of the tree, they pulley-ed up the chainsaw all revved up, but with the safety on, for him to saw down the trunk!  I got a close up of him below sawing down the branch.  They did this section by section until it was just the stump on the ground. 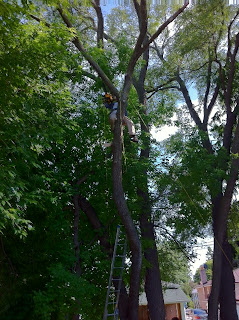 \
I swear the branches didn't look that big before, but after it was sawed down, each branch was easily over 20 feet.  I was glad that none of the falling branches hit my garden!  Below you can see the neighbour coming over to collect firewood.  He was pretty much around the entire time watching the show, and waiting for wood. 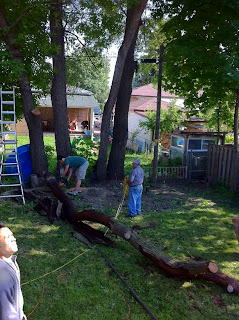 Throughout the summer, Kel's been putting up our fence piece by piece.  Sometimes Erica would come over and nail in a couple boards, too.  Below, you can see the finished product: our fence as it stands today. 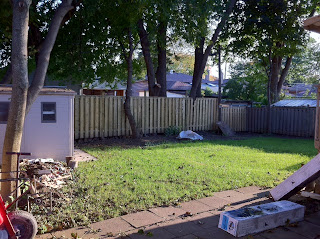 Posted by BubBLeS at Wednesday, September 28, 2011