The painting came in! (sort of)

I just realized that I've taken a whole month off blogging.  What's happened since then... hmm..

-> We've finally put down a deposit for our bed and sofa.  That'll take six to eight weeks to deliver.  We're estimating mid-September?

-> We've been waiting for the mattress we like to go on sale, and it finally did!  That got delivered two weeks ago and we were so excited, we immediately took out the old one, dismantled the bed frame and laid out the new king-size on the floor.  We get much better sleep now, and I no longer grunt at Kel when he comes into bed late and wakes me up. :)

-> We're still having endless bbqs with different friends at the house, as that's the easiest and fastest, ending off with ice cream for dessert of course!

-> For those who've been worried about Mr. Plant, don't worry, my black thumb hasn't killed him yet.  He's still alive and doing quite well.  The new shoot has grown quite tall and we can see tiny nubs on him about to unravel to become full leaves.  Kel has also decided that Mr. Plant needs a first name, and so he is now Mr. Raphael Plant.

-> Kel is still battling with the weeds out in the lawn.  He's making progress, but the battle is still not over!

I got this discount coupon for an online photo printing place last month, and I've been working with their designers to turn one of our photos from Shanghai into a triptych to put in our bedroom.  Kel and I figured it'd be easier to print a picture we like for wall art, then to spend endless hours shopping for one we can both agree on.  What's great with dealing with online vendors (as I've discussed with Flo), is you don't feel so bad asking for more proofs.  I had never intended to print photos any bigger than the regular 4x6, so setting 5x7 as a maximum seemed to make sense.  (That's the equivalent of setting my camera to the three megapixel setting even though it had the capacity of shooting at ten.  It also didn't help that for some reason I thought a three megapixel photo equated to a three megabyte file, but that's a different story.)  Anyhow, so I was working with their designer (and Flo) and contemplated the possibility of printing the picture itself, versus one with the digital paint effect, black and white, and colour isolation.  This took quite a bit of time, as everytime I asked for a new proof, it'd take the designer a few days to get back to me.  In the end, we decided to go with just the picture itself with no effects as the slight blur would work with printing on canvas.  It wasn't another two weeks before I got another email with the UPS tracking number saying it would be delivered today!  I was so excited, I stayed home (worked from home that is,) to wait for it and of course it had to come during a meeting, but after that I went to open the box and... 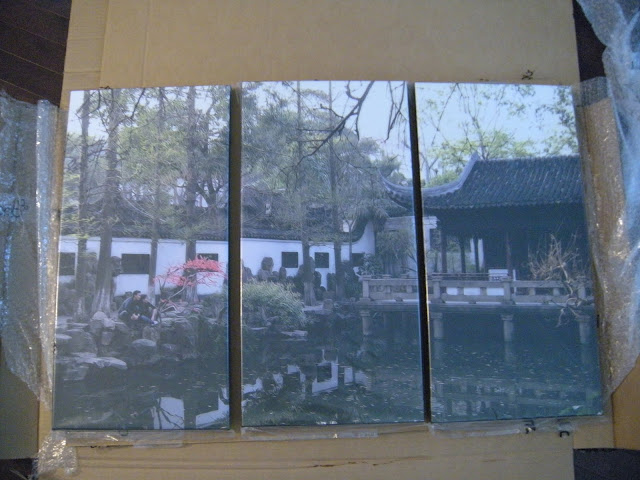 ... it was our picture with the digital paint filter!  They printed the wrong proof!  After chatting online briefly with their support person, they admit the designer had a misunderstanding, and will be reprinting our picture as soon as possible.  The down side is, it'll be another week or two before it gets here, but when it does arrive, we'll have both copies right in front of us to decide which we'd want to hang.  As well, it's not like we can hang it before the bed comes anyways, so it's a win-win for us!

Oh, and of course with both of us being in the picture, I'd have to thank Sunny for helping us frame the setting and taking multiple shots.  I actually have a series of photos from when Kel and I were getting onto the rock, and having random people in the background, to this, and of course, one where Sunny insisted we pointed at something. :P
Posted by BubBLeS at Monday, August 30, 2010 0 comments