We finished tiling our shower walls tonight.  As promised, photos are below.  We still need to grout this weekend before putting up the glass walls, but that should be quick.  :) 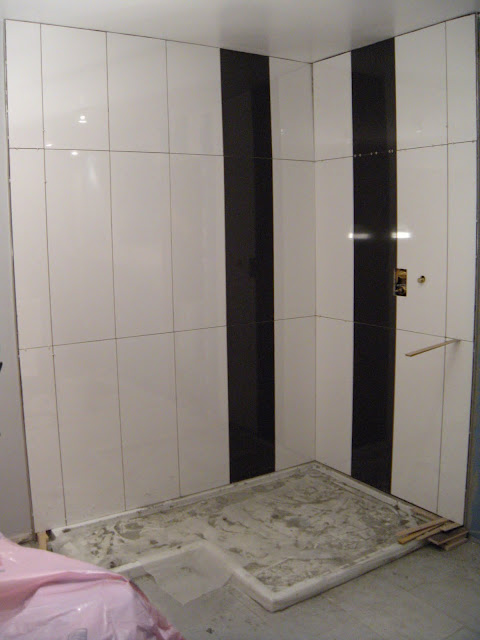 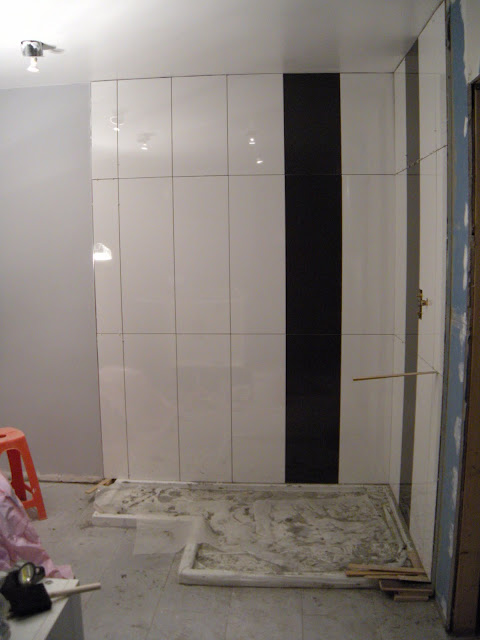 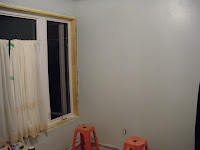 We've lost our dedicated painter Ceci for almost two weeks now, so the progression of painting has gone to a stand still.  It's almost like our foreman Erica has been grieving over this lost and chose to do other work around the house instead.  Well last night, since Kel was tiling the shower wall,

Erica was unable to do any sanding around the vicinity, and was left with either putting up foam boards behind the furnace or painting the office.  I convinced her to start painting the office since we had a couple hours, and putting up foam boards need not be a continuous task.  (You can put one up and go do something else, but you can't paint a patch of the wall and walk off.)  So here's to another room done!

When Kel walked in, his first comment was.. I love it, but is this... Hippo's color?
Oddly enough, it does remind me of our Moomin hippo...
Posted by BubBLeS at Thursday, November 26, 2009 0 comments

Materials for the house

Kel finally made it to the flooring store today before their warehouse closed and picked up our lot of hardwood for the living/dining and hallway!  We were originally planning on getting someone in to sand and repolish our existing hardwood floors, but with the current sale, it isn't costing us very much more to get new ones.  Next step would be to pick out the hardwood for the office off of their sale list, and order the ones for our master ensuite!

One of our tasks for tonight is to finish tiling the shower wall in our ensuite.  Kel's already pre-cut all the necessary pieces over the weekend.  Keep your fingers crossed, I might just be able to post pictures of the finished wall tiles later tonight. :)
Posted by BubBLeS at Wednesday, November 25, 2009 1 comments

One step forward, two steps back...

This weekend, while Kel was working on reinforcing our staircase, he found a piece of rotted wood. Upon closer inspection, he discovered that the bottom piece of wood where our once brick wallpaper covered wall stood, was ninety percent rotted through. Apparently, the hole where the wall sat on the basement floor was not lined with cement. This meant that for the last fifty odd years, it's been sitting on top of moist soil, slowly rotting away. Conclusion? Kel took down the bottom part of that big wall and relined the slit in the ground with cement. And of course, if this was happening on one side of the stairs, it was also happening on the other side. This meant he also had to remove that wall as well. The stairs to our basement is now free standing, with no walls or rails on either side. It opened up our basement even more, but is definitely tacking on extra work and time.

View from our front door looking down:
(Yes, that's Kel and his dad we see in the basement) 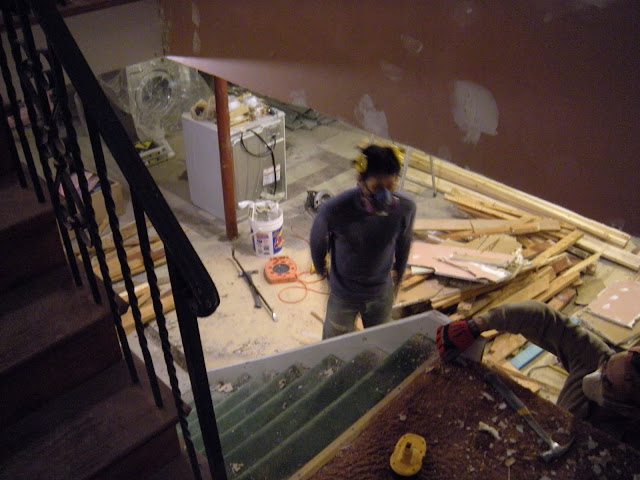 View from the bottom of the stairs (in the basement): 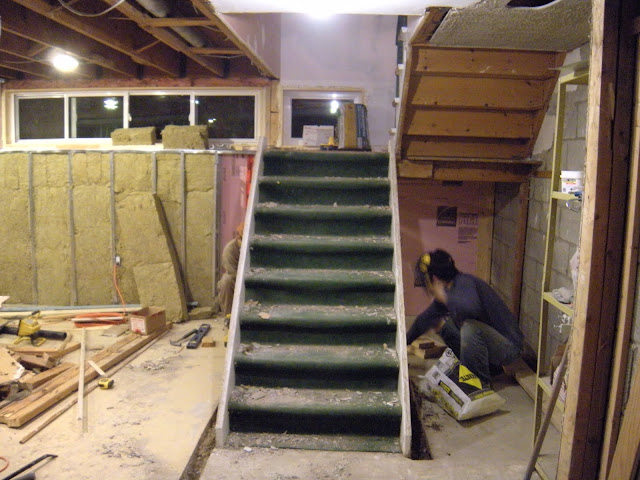 View from the top of the main floor: 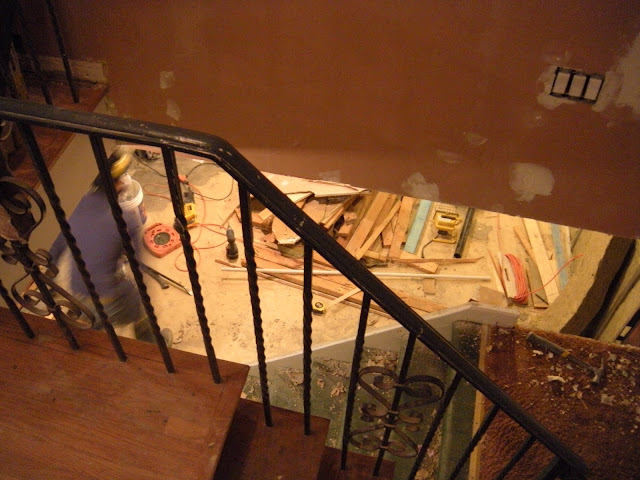 The counters we ordered came in this Saturday.  Our island counter was so big, they had to send three guys to carry it and still they had to ask Kel for his help!  Out kitchen definitely looks a lot more complete now, and we realize how much more space we've got! 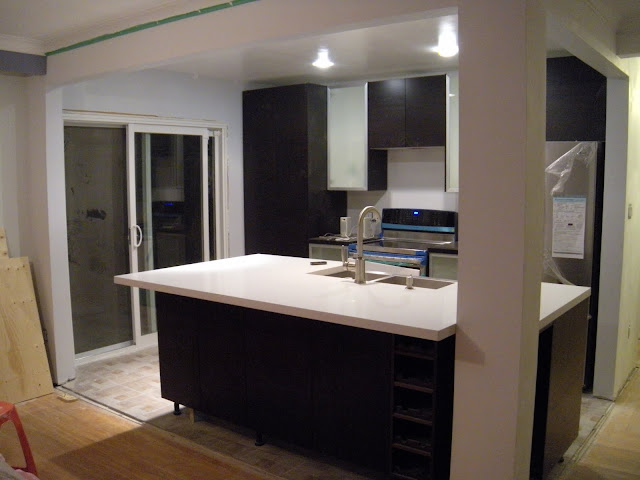 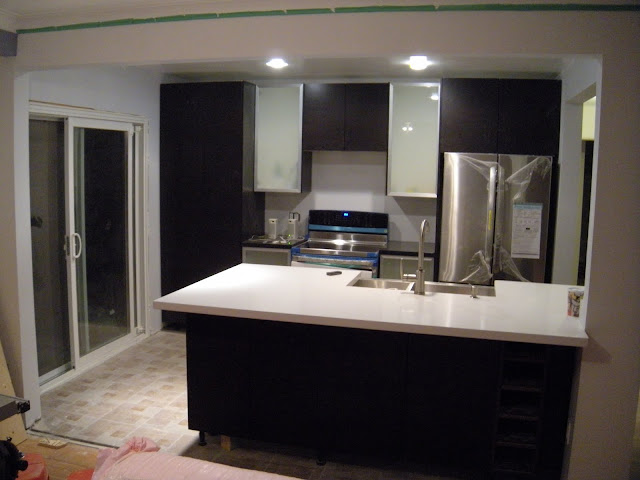 On the other hand, Sears called to say the timer part for our range hasn't come in yet and they'll let us know when they do get it and can schedule a repairman.
Posted by BubBLeS at Monday, November 23, 2009 0 comments

Bunny had a play date with Winnie's dog Yoshi.  They didn't exactly become friends, but it's a start!

The last couple of weeks, one of our parallel jobs has been to clean up the basement walls and prep it for insulating.  We've glued the foam boards on, build the metal frames/studs, and are almost done filling it with insulation.  Speaking of which, we've already made three insulation runs to Lowe's to date.  And for anyone needing a reference, the Caravan fits 9 bags.  Kel has also build the metal frame for the walls to the laundry.

Below: the before clean up, during insulating, and now. 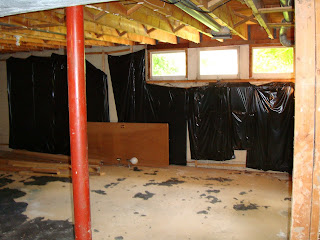 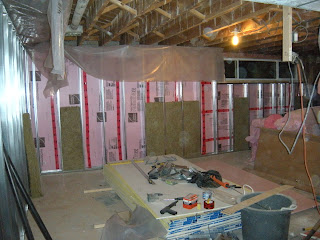 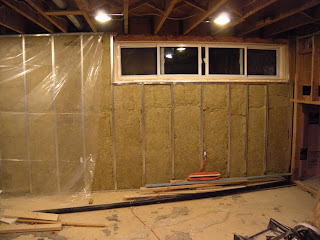 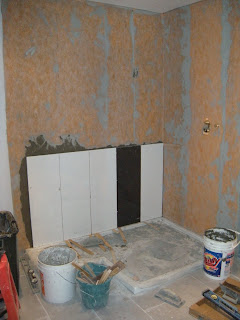 On the right, wall tiling of our ensuite shower has begun!  For anyone who watches renovation shows on TV, you'll recognize the orange membrane Kel's prepped on the walls this past weekend.  Can't wait to see the finished shower!

Summary of our past eight days

Yes, I realized I haven't posted in a week now, so here's the short and sweet of it. 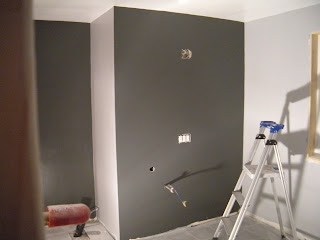 Ceci came by that Tuesday and helped us finish painting the rest of the ensuite walls.  She also came by on Sunday and painted the first layer of the big wall joining the living and dining room under Erica's guidance and Kelly finished the top layer.

Sears delivered the dryer that day as expected *phew* so that's done.  However, the crediting on the bill wasn't done and we were charged a second delivery fee, so I had to email Vicky the customer service rep to get that fixed. 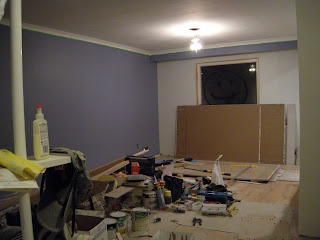 The repairman for the range came in the weekend after.  He looked at the range, and by that I seriously mean he looked at it.  He didn't pull it out from the slot between the cabinets, nor did he take anything apart.  He simply looked at it, made a call to inquire what he needed to fix it and then told us he needed the "timer" part, which he didn't have and would need to order and come back when he has it...  Really? We already told him what the problem was and what the serial model of our range was, but I guess he had to see it for himself to believe it.  We're thinking we should try baking something in the oven just to make sure it works so we don't have to deal with this madness all over again.

Besides that, we've been working on insulating the basement, and Kel's been building the frames for the basement walls.  He did another water test last weekend for the shower faucet in the bathroom and let's just say we had another water show.  LoL

Below, you can see how we (and by we, I mean Erica) adds fun to our days of work. 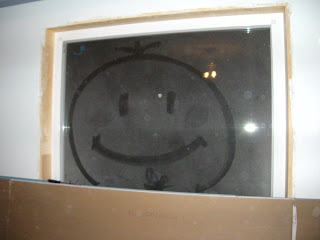 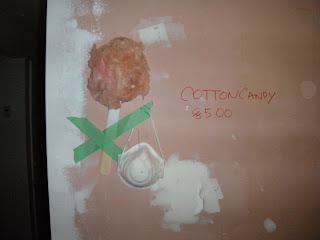 This past Sunday, Ceci came over to paint again.  Since Queenie and Lotus finished priming the living/dining room the weekend before, there were no more rooms ready for priming. So... Erica got Ceci to help start painting the ensuite bathroom! :)

Below Left: Ceci inspecting her work.. and you can see the frame Kel's dad had prepped for the closet doors.
Below Right: The pile of rubble Kel's dug up in the basement to move the toilet pipe.  (In the process, he also broke the main drain pipe... but that's fixed now and the hole's filled up again.) 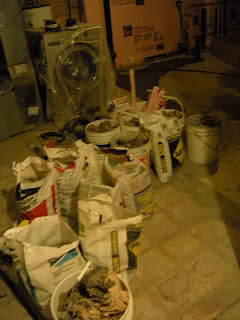 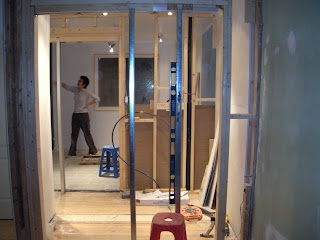 Below:  The three walls Ceci and Erica painted. (And we've managed to schedule Ceci to come help paint some more on Tuesday, too!) :D 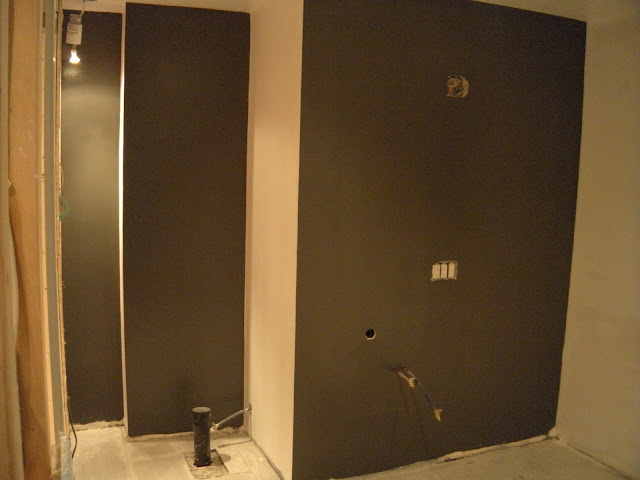 Kel and I went to the William Ashley Warehouse Sale last Friday, along with Ceci, Irene, Coral, and Erica.  The sales as usual are awesome.  (Maybe not all were 90% off, but most were at least 50% off.)  The only difference this year, was that we actually have a house to put things in. :)  We scored 2 bar stools, a floor lamp, an espresso machine, and other things for the kitchen for cheap.  I think the highlight of the night had to be when Ceci and Irene decided to purchase the Gund Bear.  It was gi-normous!  The bear itself was like 70" in height.  Everybody walking by had an inquisitive smile on their face.  It took 2 ladies, Ceci, and Irene to bag the bear at the cashier. Each limb took a bag, and plastic bags had to be taped to protect it's body.  The bear was so tall, it had to go in sideways in the backseat of Ceci's sedan, with the front passenger seat shifted up!