On one of our nights in Hong Kong, we ventured out to the infamous ChungKing Mansions (重慶大厦) in Tsim Sha Tsui to have Indian cuisine with some of Kel's family. For those who've never heard of the ChungKing Mansions, it's been regarded to be one of the more complicated neighbourhoods. People are generally advised to avoid the area for safety issues. However, it has recently been renovated and a bit more cleaned up, so its doable if you're not easily intimidated. For anyone else who's adventurous enough and has a taste for Indian, be sure to go check out Block E's "Khyber Pass Mess Club" (咖喱王) on the 7th floor. It's become a bit more well known as of late, so there are copycats within those buildings by the same chinese name. Also, beware of the aggressive "salespeople" who try to promote you to their own "咖喱王". We were led to the one at Block B instead of E. (And when I say aggressive, I mean aggressive. The guy not only led us to the elevators, but also tried to escort us all the way there.)

Below from left to right, you can see a picture of the ChungKing Mansions entrance; the directory of Block E by the elevators; and the variety of curries we had with our naan that night. 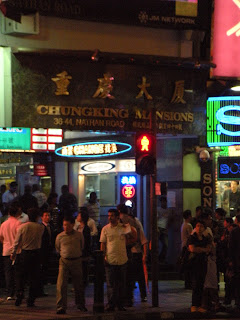 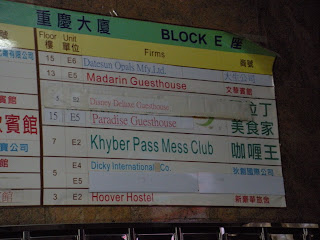 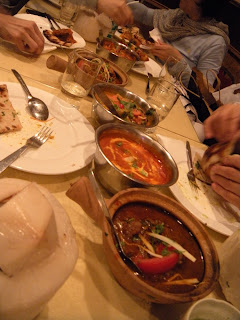 Later that night, Kel and I headed over to the Charlie Brown Cafe in Tsim Sha Tsui for some coffee and desserts.

Below: the selection of mousse cakes in the shape of Peanuts characters! Woodstock, Charlie Brown, Snoopy, and Lucy! 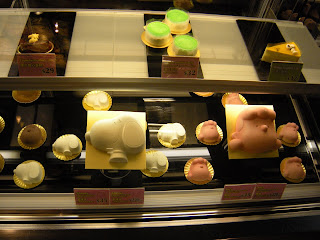 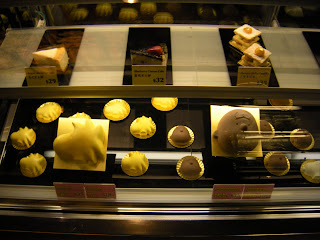 Below left:  the mango mousse I ordered in the shape of Woodstock, and Kel's slice of Charlie's cheesecake.

Below right: Kel with his mocha and cheesecake. 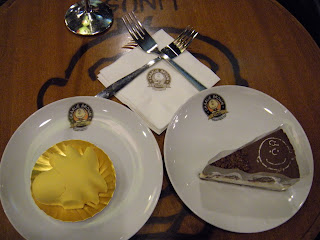 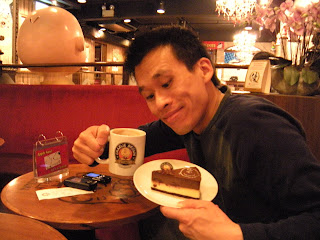 The interior of the cafe is covered in Peanuts memorabilia and statues.  The characters are printed on the tables, embossed in glass... you name it, they've got it there!  I didn't take too many photos of it this time as I've been there before (being the diehard fan I am), but I did take a picture of the vanity mirror in the ladies room!  They don't have an actual vanity light, instead, they have a light shiny from the mirror in the shape of Lucy's head!  You can see what I mean below, I thought it was pretty cool.  Kel later confirmed that the guy's washroom had Charlie Brown's head in the mirror! 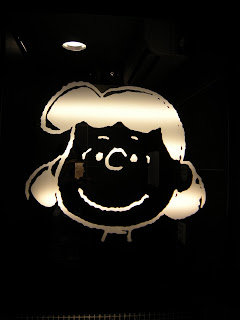 On one of our mornings, we went to the McDonald's for breakfast.  Guess what? They have pasta there as one of their items!  The store manager there wouldn't let me take a picture of their menu, so I took a sneak picture afterwards.  As well, one of their toys to collect (they have 3 different collections going at once,) is the "kid" version of the classic McDonald's characters!  I don't know about you, but I've had previous conversations before with friends where we couldn't remember all their names.  Alas, here it is!  (Yes, Erica, you're right, his name apparently really is "滑嘟嘟" in Chinese...)  OH, and for those of you in Canada, Big Mac combos are on promotion here right now...  $20 HKD anytime.. that's like less than $3 CDN!!!  We're so getting ripped off!
Below left: the item on the left there is "Grilled Chicken Twisty Pasta".
Below right: Chinese and English names of the McD characters with their descriptions. 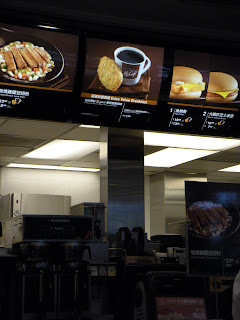 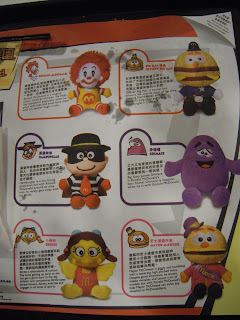 We had dinner one night with my godparents in Tuen Mun and bought seafood from the market to the Dragon Inn Seafood Restaurant (容龍海鮮酒家) and had them cook and serve it to us.
Below: a section of the market's fresh offerings still in tanks 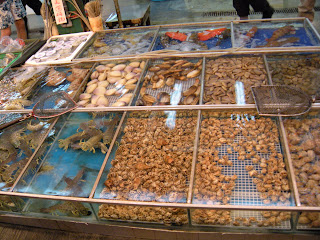 Below left: one of the items we had.. "Rock Fish" (石頭魚) (sorry, direct translation, as I have no clue what its called in English)
Below right: another item we had.. "Mantis Shrimp" (攋尿蝦) 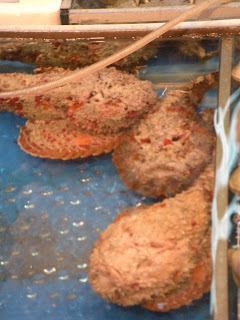 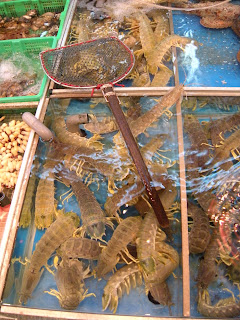 Below left: one of the dishes we had that night.. clams with vermicelli
Below right: two more dishes came.. top left is abalone, right is a cousin of the clam I don't know what its English name is.. (聖子) 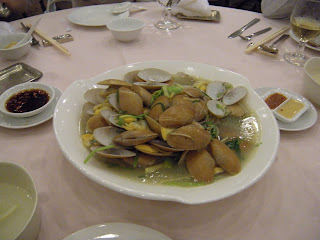 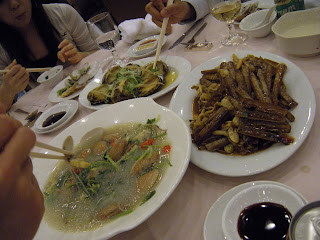 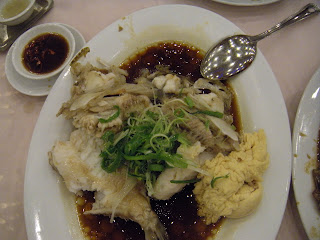 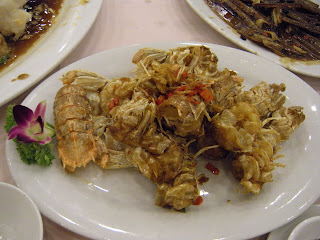 Below:  another dish we had.. steamed crab on sticky rice.. yum! 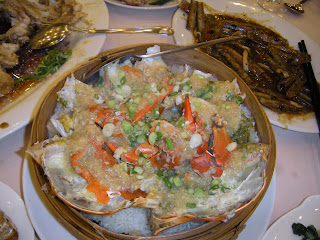