I haven't been taking a WHOLE lot of pictures in Hong Kong, mostly because we're from here and have been back many times.  So for us, its mostly shopping, meeting up with friends and family, and of course, eating.

We were actually in Mong Kok before 11am one day, and discovered that apparently the street lined stalls that are there daily are dismantled and reassembled every day!  Here, we have a picture of those labouring away putting the stands back together. 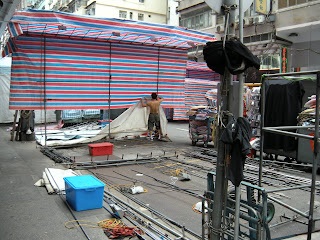 One of our nights, we met up with Freddy for some shopping, desserts, and club hopping.  Freddy's quite the dancer!  Too bad I didn't get those pics though, they're on Sunny's camera.  Below, we have Freddy feeding Sunny some mango dessert at his favourite place, Hui Lau Shan (許留山). 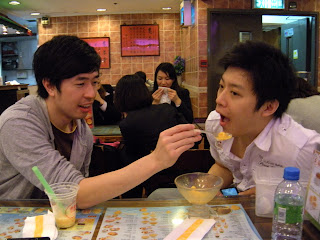 A day or so after, Kel and I visited our favourite HK cafe, Phoenix (金鳳茶餐廳) in Wan Chai.  They have my favourite chicken pies and serve a mean milk tea and coffee!  We got up late that day and by the time we got there it was close to 4pm.  Despite our dinner plans at 7pm that night, we each had: 1chicken pie, 1 egg tart, 1 yin-yeung (milk tea coffee mix), and shared a "pineapple bun" with butter!  But at the end of all that, we both still wanted ONE MORE chicken pie! :P
Below you can see how busy the cafe is even during its off hours; Kel lining up at the door trying to get us seats; Kel excited and can't wait for me to finish taking the picture so he can get started on his pie; and our feast before the extra pie. 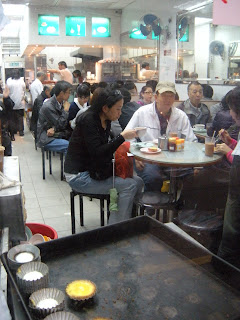 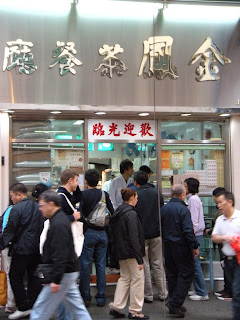 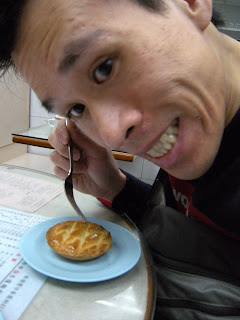 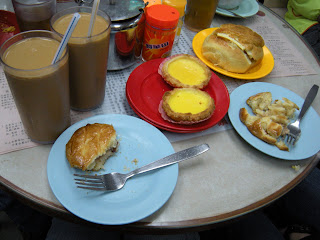 Oh, and here's a picture of me with my cousin's son Anton. We got him a toque from the Vancouver 2010 Winter Olympics featuring Quatchi the sasquatch.  Isn't he a cutie?  (both Anton and Quatchi that is!) 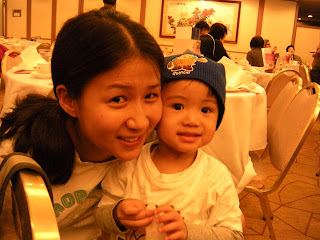 Kel and I also went up to Chung-Shan (中山), China with his god dads last Sunday and Monday for more foods.  We hit the Guduo hot springs (古兜温泉) in nearby JianMen (江門新會) as well.  On the way out, Kel's god dads stopped to purchase some dried seafoods.. Below you can see Kel having fun with their various products...
Left: Kel under giant dried starfishes.. apparently we make soup out of these?  (By the way, keep in mind that if they're this big dried, they'd be HUGE before...
Right: Kel pointing at a bag of dried porcupine fishes... maybe we make soup out of them too? 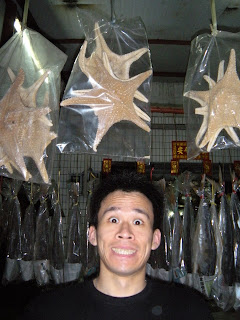 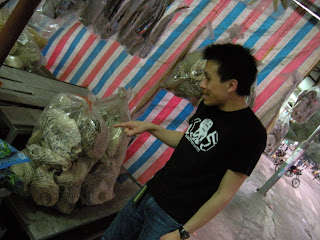 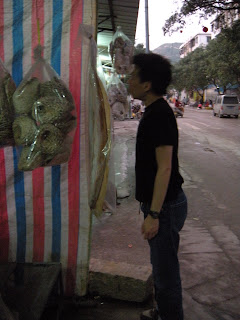 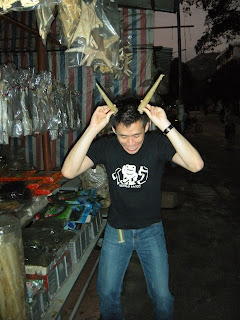 Left: Kel posing with the smaller starfishes as ninja stars
Right: Kel staring and mesmerized by the giant squid... his favourite! 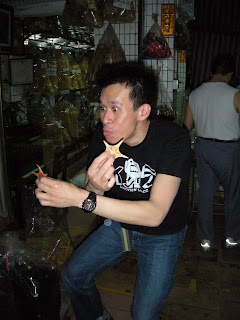 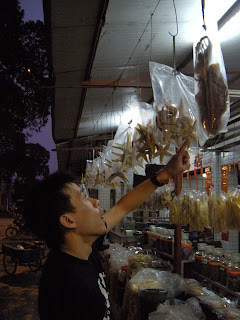 That night after dinner, we also went to a foot massage place... 70min for $50RMB!! That's like less than $10CAD!  We ended our trip the next day to a local restaurant for lunch where we had hot pot with congee. Yummm.. 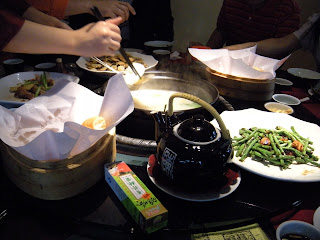 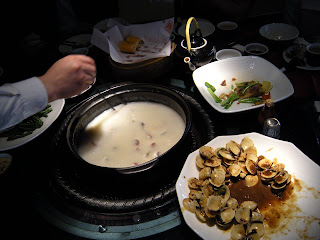