A new neighbour moved in a couple weeks ago.  We discovered her nest out back on our deck while we were barbecuing with some friends.  We decided to peek in and found that she was expecting two little ones!  Judging from the blueness of her eggs, we knew she must be a robin.  And yes, they are real eggs, not made by Cadbury, and we didn't doctor the picture in any way.  This was taken with an iPhone. 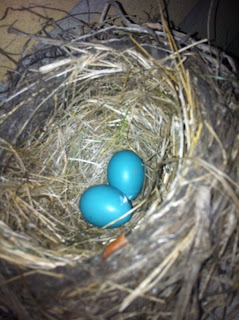 A week later, I decided to take a peek again to see how they're coming along.  Lo and behold, there are now four!  My friends started joking that we should throw some Cadbury eggs in there and see if Ms Robin would notice. 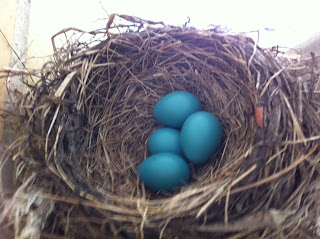 And below is what I found last week.  I'll need to check in on them again to see if they all hatched. :)  I've been hoping to get a picture of Ms Robin on her nest, but she gets spooked pretty easily; flies to the fence, or tree and chirps at me.  Hopefully, she'll get used to us being around and won't attack me or anything. :P 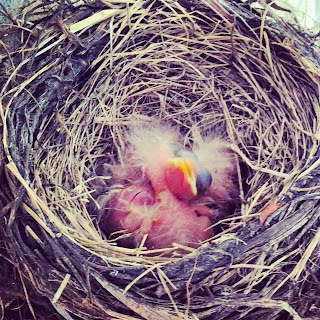