This past week seemed extra long. Although we've only purchased the LG fridge a week ago, it seems like its been at least two weeks now. Our outings this week has evolved to price matching appliances half the time and pricing the needed bathroom pieces for the other half. In our "spare time", we went looking at the different types of hardwood and flooring tiles, too! 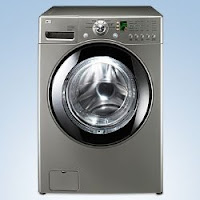 tch. This past weekend was Sears VIP weekend with extra discounts so we've been waiting for that to see what our options were like. Friday night rolled around and Kel's on my bedroom floor rummaging through flyers, while I surfed the web to see what deals were out this week. I had heard on the radio that the Brick was also doing a promotional weekend, so that's where I went. To my dismay, instead of finding even better deals, the Bosche deal last week now costed $300 more! Luckily, Kel found an ad in the paper that was promoting a Sears warehouse sale that starts the next morning, so we decided to wake up early the next day to check it out. It was a good thing we went, too, because we scored a Kenmore dryer for cheap! :)

After much debate this last week on kitchen appliances, we've decided that I'd have to sacriface my convection wall oven and him the Wolf cooktop, so we can take advantage of the current low rates and be more aggressive on our mortgage. (With that said, we've made a pact to redo the kitchen in 5-6 years time.) Even so, we still have to decide whether we w 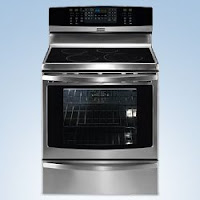 ant to get a gas range or an induction range. Last weekend, as Kel was researching the induction range, (he actually looked up the official manual for care instructions!), he found a part that cautioned the dragging of pots and pans and similar actions to prevent scratching the ceramic top. That part was disconcerting as I was highly prone to chipping, denting, scratching... basically damaging things in ways one would not normally conceive. So last weekend, when we were inspecting the induction cooktop that was on display, he surprised me by whipping out his car keys and starting running it back and forth on the ceramic top! Surprisingly enough that didn't leave a mark.

Saturday afternoon rolled around and we went to pay a visit to Frank at Sears to check out the VIP weekend event. We asked him about the induction range and he highly recommended it. Kel asked him whether the ceramic top is easily scratchable and he whipped out a metal clip and ran it across! He then handed it to Kel so he can run it as much as he liked! Huh, makes me wonder if that's the norm, or I just happened to be with two crazy guys, because that certainly is not "normal wear and tear". Something else Frank pointed out was that we should change the breaker in the back to 50amps. Apparently, thats half the load of our house, so we'd either have to be wary of turning on too many things at a time, or up the ampage of our board. Anyhow, we did end up purchasing the Kenmore induction range, as well as the LG front loading washer. Frank worked his magic and pulled in our fridge from last weekend to up our appliance purchase to three pieces to get us a better discount. And yes, to Ken's point, our washer and dryer do not match. They're not the same color, nor are they the same brand, because seriously, who cares?!
Posted by BubBLeS at Monday, June 15, 2009